Yes, I disappeared for a long time!

It has been a strange kind of tense summer.  I don't know why.  I have been completely unmotivated to do much of anything, including blogging.  I was happy to be gardening, then I ended up only getting a few tomatoes and various herbs.  I had things to do that didn't get done.  We had some health insurance issues that threatened to put me in a mental home for a while.  We have had dog injuries, dental issues, glasses issues for Alex that went on for 2 months (he had to wear taped glasses while the insurance people figured out how to make him his specialized lenses) and a few money issues.  I know there is more, but I will not wrack my brain trying to remember something negative!
I have to say, the last 2 days have made me start to feel like a human again.....  Why?  Because it has cooled off and there is a nice breeze!!
The latest occurrence is Hector the mighty basset got glaucoma in his right eye and had to have it removed.  He was most likely blind by the time we saw the swelling.  He just had the procedure done today and is convalescing nicely....  Still stupid from the anesthesia, but relaxing by himself with a big bone and some kibble drenched in bacon juices.  The other dogs probably hate him from jealousy.   We will be getting him a patch and he will get a new nickname....  Most likely Pliskin or one eyed Willie. 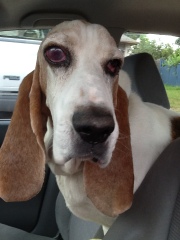 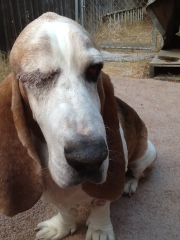 Before and after.  I think he is still an incredibly handsome dog......  Just like I think Snake  Pliskin was incredibly handsome with his one eye! (From Escape from New York)  (so hot, I love Kurt Russell)!
Well, see y'all later.... Off to make flap jacks and bacon for dinner! Mmmmmmmm.....
Posted by bostons bites and books

What I am reading